“We remember Hobey Baker as a legendary athlete with a command of his sport as well as an exceptional combat flyer. But his greatest strength was that of a leader. Hobey was able to achieve so much because he was a man of integrity, selflessness and citizenship. West Laurel Hill Cemetery is honored to be the final resting place of Hobey Baker and as stewards of his gravesite, we will keep his memory alive in perpetuity,” said Nancy A. Goldenberg, President and CEO of West Laurel Hill Cemetery.

Guest are asked to arrive promptly at 9:30 a.m. and process to Baker’s grave. Following the graveside commemoration, the public is invited to a reception at the Conservatory at West Laurel Hill for a breakfast reception where attendees can view the actual Hobey Baker Award, given annually to the top National Collegiate Athletic Association men’s ice hockey player, and to meet relatives of Hobey Baker, representatives of the Hobey Baker Memorial Award Foundation, Lower Merion Township Commission President Andy Gavrin and Lower Merion Ice Hockey Club players.

“Hobey Baker is most well-known as a collegiate hockey star from Princeton, but it’s his service during WWI that makes him a true American hero,” said Andy Gavrin, Lower Merion Township Commissioner. “We are honored to count him as a Lower Merionite and on the 100th Anniversary of his death, are thrilled to be able to honor his legacy.”

This event is free and open to the public, but registration is required. Donations are encouraged to help preserve and maintain Hobey Baker’s gravesite in perpetuity. Guests can register for the event at www.westlaurelhill.com/events. For media inquiries, contact Joanie Sweeney at [email protected] or (610) 668-4258. 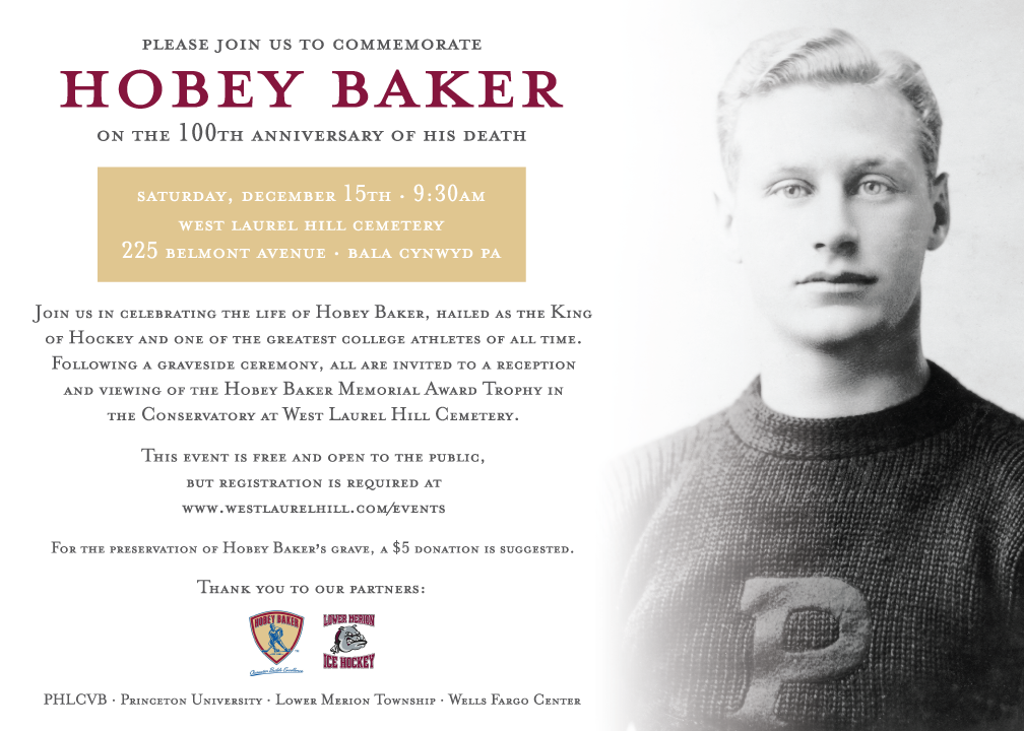