The junior forward from Braintree, Massachusetts led all Division I players in the nation in total points, goal scoring and points per game. Due to his relentless compete level, it wasn’t unusual for Gaudette to log almost 30 minutes of icetime each game. He was honored by the Hockey East conference as their Player of the Year, First Team all-conference and Hockey East Scoring Champion. On two occasions (January and February), he was named national player of the month by the College Hockey Coaches Association.

Best known as a complete, 200 foot two-way player, Gaudette proved to be tough to defend with his deceptive speed and his passion to compete at both ends of the ice. He had plenty of local support having grown up in the Boston area and was enthusiastically cheered along by his large extended family who became known around Matthews Arena as “the Gaud Squad.” Recently, Gaudette was named the 2018 winner of the Walter Brown Award given annually to the top American born player in New England. 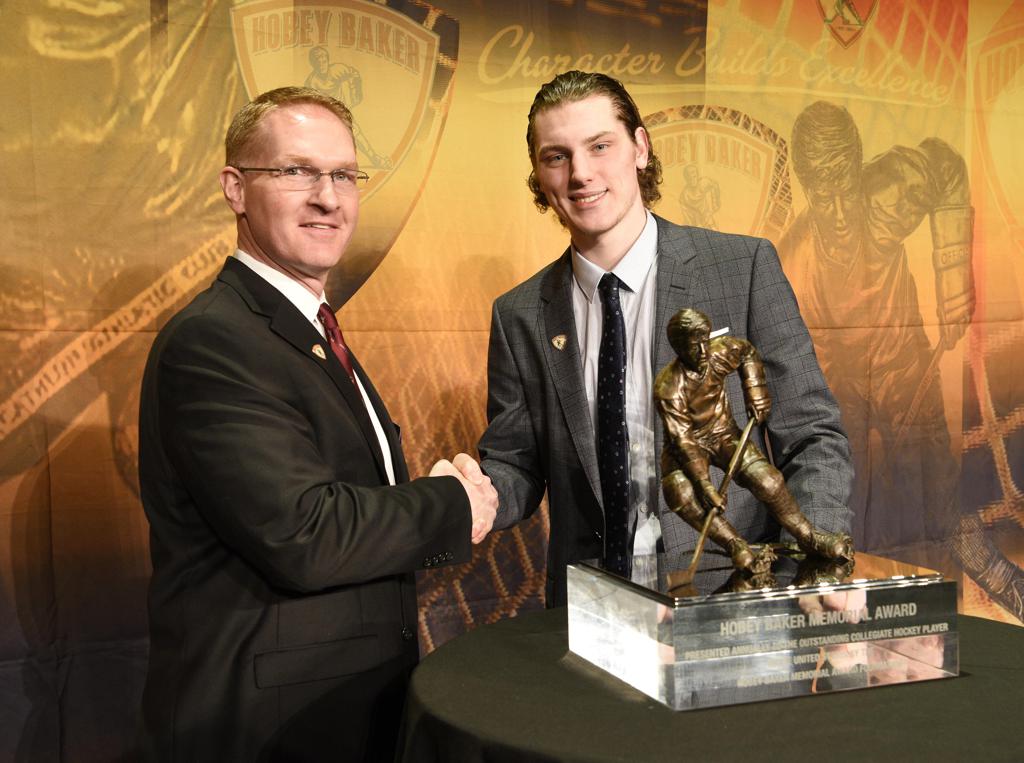 Adam Gaudette becomes the first Hobey Baker Award recipient from Northeastern University. He has surpassed 50 points in two straight years and in 116 career games, has totaled 142 points. Adam recently signed a pro contract with the team that drafted him, the Vancouver Canucks (2015, fifth round) and will forgo his senior season.

The big skilled winger had a banner season and was honored by the NCHC as their Player of the Year, Forward of the Year and First Team all-conference, while leading the conference in scoring in only his second season of college hockey. Providing Denver with 11-game and eight-game point streaks, Borgström sits tied for fourth in the nation in scoring and tied for ninth in goals. Henrik recently signed a pro contract with the team that drafted him in the first round of the 2016 NHL Entry Draft, the Florida Panthers.

It’s been a wild season for scoring whizz Ryan Donato. Bagging 26 goals in just 29 games for Harvard, Ryan also helped Team USA at the 2018 Winter Olympics leading the team in scoring with five goals and an assist. A powerful skating two-way center, he was named the ECAC Player of the Year and First Team all-conference. Following his college season, Donato, a 2014 second round draft pick of the Boston Bruins, turned pro with his hometown Bruins and has five points in his first five games (3-2).

Exploded on the scene establishing Galajda (Ga-lie-da) as one of the best goalies in the nation. Entering the ECAC tournament he sports the best goals against average in the nation in six years with an impressive 1.43 mark. He’s received a plethora of post season awards already including: ECAC Goalie and Rookie of the Year, inclusion on both the league First Team all-conference and All Rookie teams, received three Ivy League honors including Ivy League Player of the Year and is a finalist for ECAC Player of the Year.

A skillful, puck possession scoring threat has made McLaughlin (Ma-Glock-lin) one of the top forwards in the nation. The Atlantic Hockey scoring champion and First Team all-conference playmaker has vaulted to sixth in the national scoring charts. He got off to a fast start, collecting points in 15 of his first 16 games. His 31 assists in 36 games ranks him sixth in the nation.

After reaching the Frozen Four last season, how would the Irish find another goalie to replace Cal Peterson? Meet Cale Morris. He stepped right in to lead Notre Dame to the regular season conference title as first year members of the Big Ten. Morris sits first in the nation in save percentage at .946 and tied for first in wins. He was named First Team all-conference, Goalie of the Year and Big Ten Player of the Year. Not bad after playing just one period as a freshman.

Make no mistake Colgate’s success was due to Point’s spectacular play in goal. In 16 of the 33 games he played, he had 30 or more saves including a 51-save effort in shutting out Harvard. After leading Team Canada to a gold medal in the World Junior Championship game, Point returned to campus the next day and shut out Princeton. He is a finalist for the ECAC Player of the Year Award after earning Second Team all-star recognition.

The lone defenseman in the Hobey top ten, Schuldt (Shult) is a complete player at both ends of the rink with high-end offensive skills. Already named to the NCHC all-conference First Team, he is a finalist for Player of the Year and Offensive Defenseman of the year. Possessing a canon of a shot, Schuldt’s eight power play goals has helped elevate him to third in the nation in points by a defenseman. The two-time team captain has helped guide the Huskies to #1 in the nation.

As a linemate of fellow Hobey candidate Adam Gaudette, Northeastern possessed the top one-two offensive punch in the nation, terrorizing goalies everywhere. Presently third in the nation in scoring, Sikura is known as a creative playmaker but tops the nation in power play goals with 13. He finished second in conference scoring to Gaudette and was named First Team all-conference.

What a shining final season for two-year captain C.J. Suess (cease). After capturing the WCHA regular season scoring title, he was named Offensive Player of the Year, First Team all-conference and is a finalist for Player of the Year. A diligent two-way center and a key faceoff man, Suess helped guide the Mavericks to the regular season title and presently sits 12th in the nation in scoring.