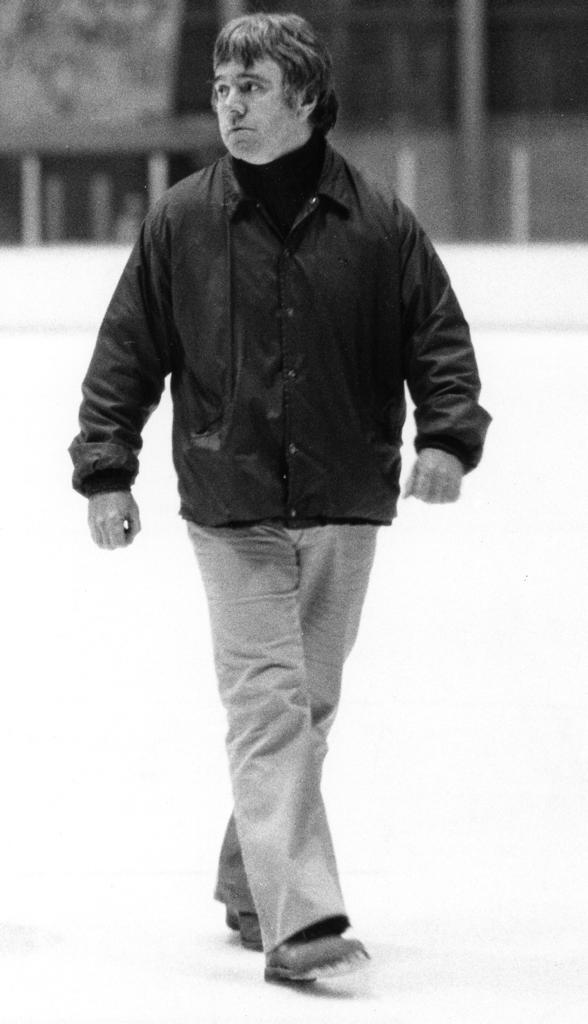 He was widely recognized as the architect of University of Vermont hockey. Jim Cross coached the Catamounts to one of the most impressive Division II records in history and guided the program to its entry into Division I hockey. Integrity, loyalty and an untiring work ethic elevated Cross to a class of his own among college hockey coaches.
Taking over a Vermont program in its’ third year of existence for the 1965-66 season, Cross led the Cats for the next nine seasons in ECAC Division II hockey, culminating in back-to-back ECAC II championships in 1973 and 1974. Vermont then moved to Division I competition for the 1974-75 season, as Cross guided the “Cinderella Catamounts” to a third place finish in the ECAC standings (12-5 conference, 24-12 overall) and a third place finish in the ECAC playoff championships. Cross then added nine more seasons of Vermont hockey to his coaching resume, retiring from coaching following the 1983-84 campaign. Over his 19 years of coaching the green and gold, Jim Cross compiled a 280-251-9 record.
His greatest run came in Vermont’s last five years as a Division II school (1969-1974) — four appearances in the championship game and three titles, while accumulating a mind-boggling .863 conference winning percentage (78-12-1). In the back-to-back title years of 1973 and 1974, Cross’s conference record was an unbelievable 37-1. Wildly enthusiastic Gutterson Fieldhouse crowds cheered on the 16 All-Americans he produced and the national media attention garnered by the efforts of Jim Cross.
“No one gave more than Jim Cross,” said Denis Lambert, one of three athletics directors Cross served under at Vermont. “He was fiercely loyal and made many personal sacrifices during his coaching days. Cross was a strict adherent to the rules and his players performed hard, but with integrity.”

Another former head coach, Mike Gilligan, echoed Lambert’s comments: “When I was at Yale (in the early 1980s), Jim had the reputation of being as honest a coach as there was in college hockey. His approach to the game and his integrity was unparalleled. When I came to UVM, he was absolutely great during the transition. I couldn’t have come into a more supportive situation.”
Cross’s coaching colleagues honored him as the nation’s Division II Coach of the Year in 1974 and in 1975, the school’s first season in Division I, he was named ECAC East Division Coach of the Year. Cross continued to work for the University of Vermont until his retirement in 1994.
He was inducted into the University of Vermont Athletic Hall of Fame in 1996. Cross was also head varsity coach in two other sports. Cross served as interim baseball coach in 1968 and also served as the varsity golf coach for 10 years while instructing in the athletic department. 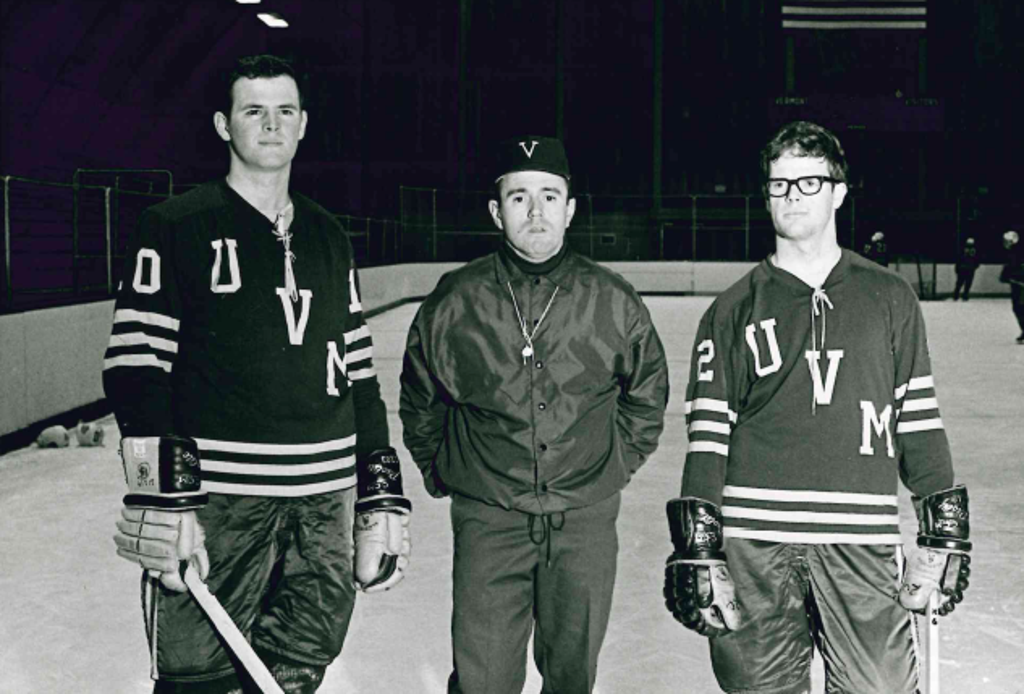 A 1960 graduate of Boston University, Cross played 32 games over two seasons helping the Terriers to a 32-16-2 record from 1958 to 1960, and a third place finish at the NCAA tournament in 1960. He arrived in Burlington, Vermont in 1961 as Director of Physical Education where he remained until 1965 when he accepted a position as UVM’s assistant hockey coach, which turned into the head coaching job the following season.
The Hobey Baker Award Committee continues to honor the all-time great contributors to the game of college hockey each season with its Legend of College Hockey Award. Congratulations to Vermont’s Jim Cross for leaving your indelible trademark on the collegiate game. 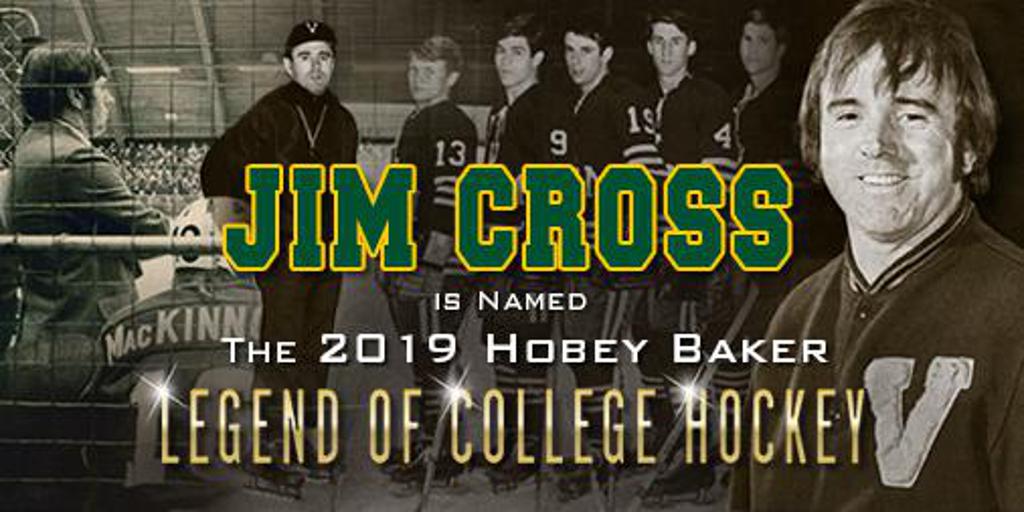 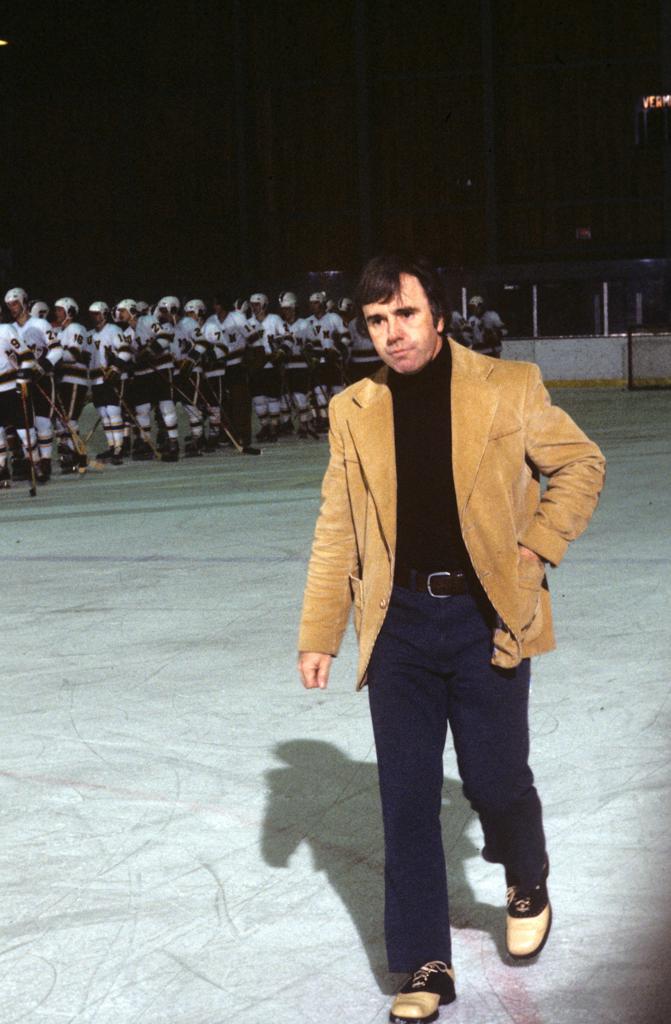 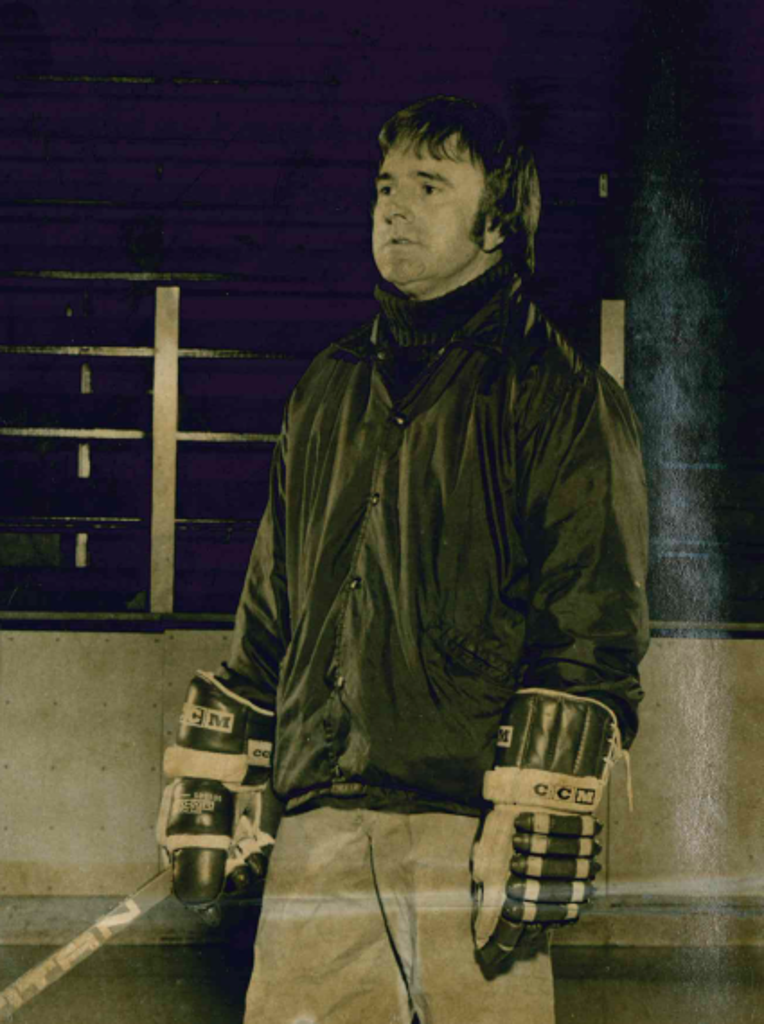