Gordon ”Red” Berenson has retired after 33 beyondspecial seasons as the ice hockey coach at the University of Michigan, his beloved alma mater.
He leaves behind 848 victories, and only three peers have exceeded that.
He leaves behind two national championships, in 1996 and 1998, and two Hobey Baker Award winners in Brendan Morrison (1997) and Kevin Porter (2008), as well as 11 Frozen Four appearances, a record 22 consecutive NCAA Tournament berths, 20 CCHA regular-season or tournament titles, and Michigan’s first Big Ten Tournament championship in 2016.
Yet, there’s one most important accomplishment that Berenson, 77, isn’t leaving behind.
That is the Wolverine hockey family he created, and Berenson will always sit at the head of the table when his “boys,” some of whom have sent their sons to play for him, congregate at Yost Ice Arena.
“Our program runs so well because we’re connected to one another,” said Joy Berenson, his wife of 56 years with whom he raised four children. “Without the connection, it falls apart.
“That’s what makes this permanent rather than just the (team) goal thing.”
Forward Cutler Martin, who has played three seasons for Berenson, nodded in agreement prior to Monday’s (April 10) farewell press conference. 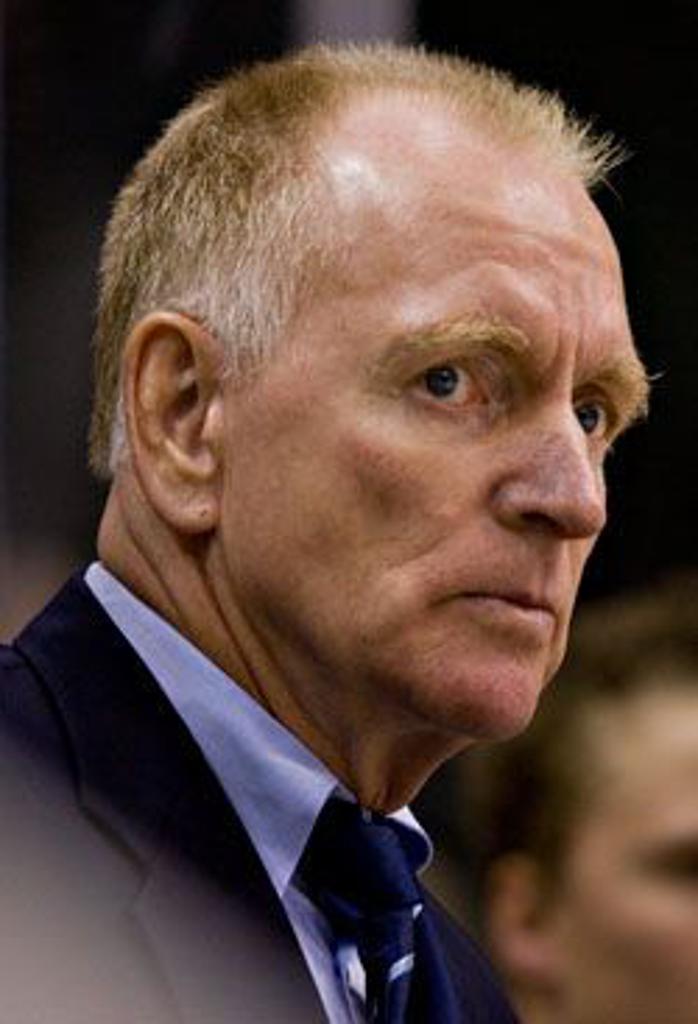 “As you can see,” said Martin, “our whole team has turned out today in support of Red. He’s been so much more to us than just our coach. He’s our mentor for life and has been teaching us lessons every day that we will carry with us beyond Michigan.
“He’s created a family that is tight and a team that knows the players can lean on each other and their coaches. That’s more important than just the games. He talks the talk and walks the walk, and that’s why he’s a legend.”
Berenson realized something central to success while starring for the Wolverines as a two-time All-American (1961 and 1962) and team captain and playing in the NHL for 17 seasons (winning the Stanley Cup with the Montreal
Canadiens) and then serving as an assistant coach and head coach (winning the Jack Adams Award as the NHL’s coach of the year with the St. Louis Blues in 1981) for five more NHL seasons.
What he found over his previous hockey experiences was that the best teams play for one another, fired by a brotherhood. And Berenson went about building a family unit rather than just a hockey team.

That was never clearer to me than when many of his “boys” came back to support Scott Matzka, the rugged forward who assisted Josh Langfeld’s game-winning goal in the 1998 national championship game. A team of Wolverines alumni played a squad of Detroit Red Wings legends at Yost in a benefit for Matzka, who has ALS, also known as Lou Gehrig’s disease.
They broke bread together after the game, with many of the players bringing their own children and spouses to the table, and smiled ear to ear. 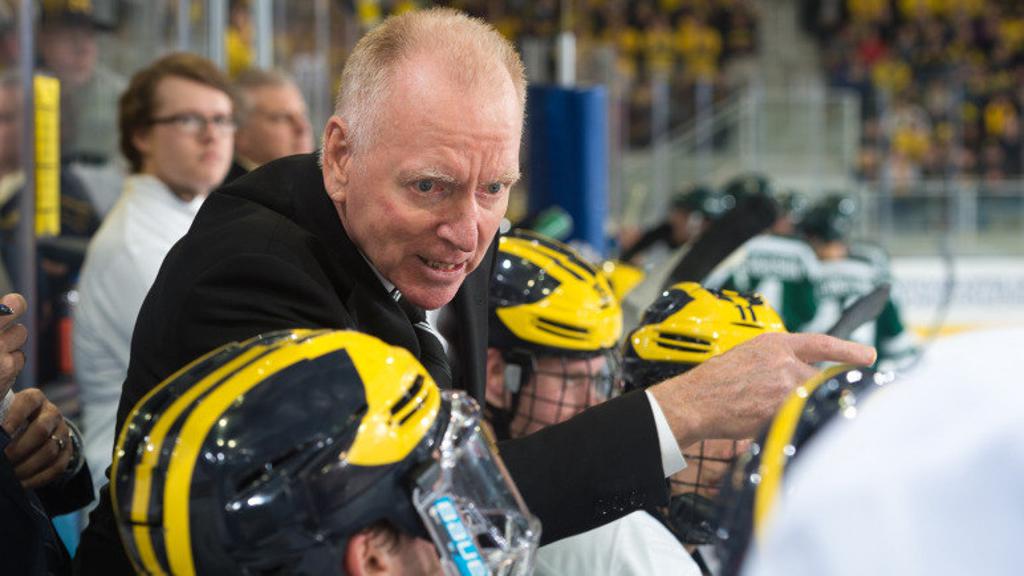 Matzka pushed his wheelchair into Berenson’s office afterward for a conversation that was both moving and chilling.
“That’s the family,” Matzka told his coach, motioning outside the door. “That’s way bigger than hockey and the team, and it’s pretty incredible.”
I’ll remember that moment longer than any game I saw Berenson coach. It spoke volumes about what one man had created in that rink on State Street.
“The first thing that comes to mind when playing for Michigan is playing for Red Berenson,” said Detroit Red Wings forward Dylan Larkin.
The last time I spoke with Berenson for a story in his second-floor office at Yost, which doubles as a hockey museum with trophies, plaques and countless photos, was to discuss one of the top scholar-athletes on his team, defenseman Sam Piazza. He spoke of his great admiration for Piazza and then detailed the importance of getting a Michigan degree to his own life. He got a bachelor’s degree from the School of Business Administration in 1962 and a Master of Business Administration degree in 1966, coming back between NHL seasons to get that.
“It’s everyone’s dream in hockey to have a pro career,” said Berenson, “and I was lucky to live that dream. But I’m so glad I came to school even though I still haven’t had my first job out of hockey.”
I had to chuckle at that comment because it brought to mind just how rare Berenson’s accomplishment was of such a long career playing and coaching in the NHL and college, a trek that began when Dwight D. Eisenhower was president.
Berenson scored 79 goals in 84 games in three seasons with the Wolverines in an era when freshmen weren’t eligible to play. Fifty-five years later, Berenson remained deeply involved in the game he loves.
He never needed a degree to fall back on but knew it made him a better man and a better coach, one who could tell his players about the value of a degree even though he never technically used it to get a job.
“I was prepared,” continued Berenson. “I came back and got my MBA, and I think it makes sense. So many players I played with said, ‘I wish I would’ve had your education.’ It’s just the opportunity to go to school and what it means.”
That emphasis on education was central to the family atmosphere. Parents stress that to their children because they want their lives to be as good as they possibly can be, and Berenson was just like that for them.
I asked Berenson on Monday if the hockey family he’s built is his proudest accomplishment as the Michigan coach. 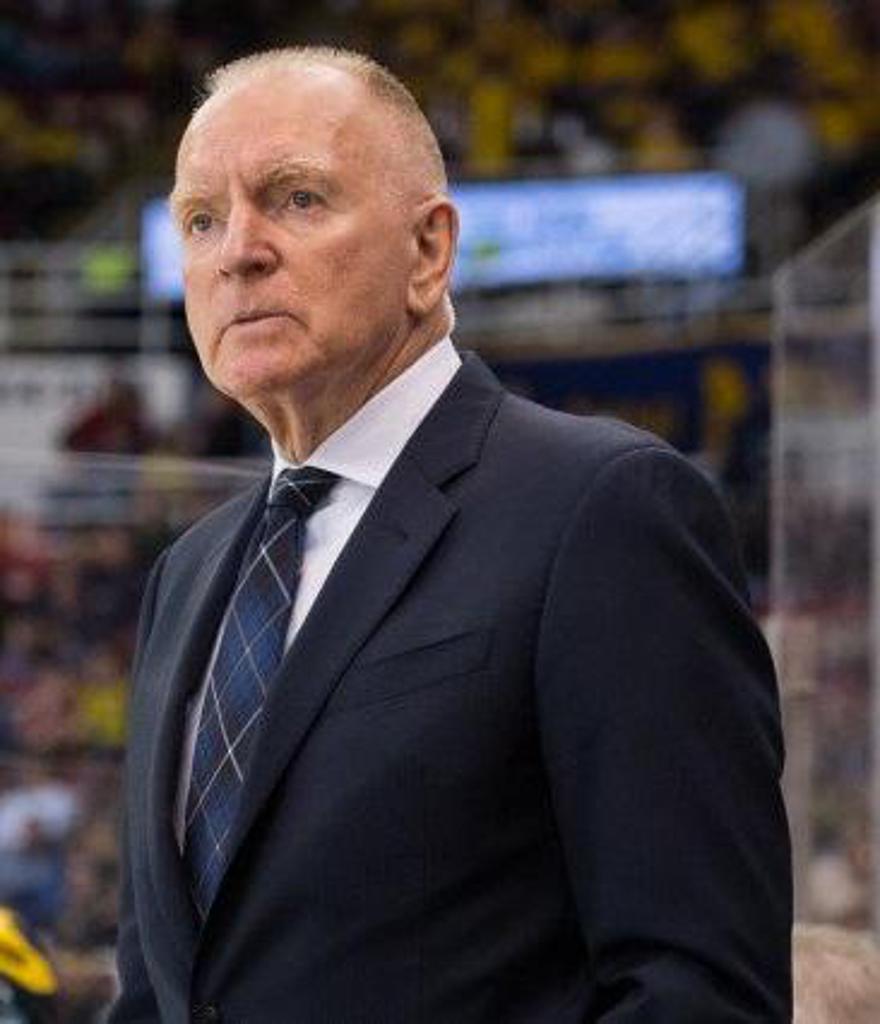 He looked out past the rows of reporters at a player who came to him 30 years ago and said, “I like the fact that these players who leave, and there’s Timmy Helber in the audience, and he’s going to be a grandpa pretty soon. We’ve got (current player) Will Lockwood and I coached his dad (Joe). A couple of players in the Frozen Four were sons of players I coached at Michigan.
“So, that’s a bit of the family at Michigan. I want this to be a big family. I want the players to feel that this is family. Even the guys I came to school with in the late ’50s, we’re still best of friends and we stay in touch. So, it’s a big Michigan family.”
“My motivation (was) to help these young guys and help them change their lives and live their dreams. I always felt strong about life after hockey.”
He learned that lesson from his coach, Al Renfrew, and never forgot it.